Has the pandemic spawned and opportunity for virtual osmotic communications?

Has the pandemic opened our experiences to make  a new type of meeting "Virtual Forum" a possibility?

Meetings, pre-pandemic, require us to get up and go to a meeting room. Some bring a laptop and continue other work, others bring their lunch. Those with their laptops remain "semi-passively present" while still achieving a level of base workflow productivity (PPWP). They strive to benefit from the meeting osmotic communication while still doing their base work.

For most it is difficult or inappropriate to achieve PPWP, the meeting is an interruption to other work. Inhibitors to PPWP are:
But what if the meeting's rules of engagement where:
It challenges my concept of a "meeting". So perhaps it is a virtual forum. So much value in a name to let participant know how they are expected to engage and use the forum/meeting.

I think Virtual Forums might enable:
What I'm wondering is .... rather than just inviting those who you know need to be engaged, but everybody. Make passive engagement with minimal interruption OK. It enables a new type of collaboration.
Posted by Rob Smyth at 18:28 No comments:

To show only properties that have an explicit Display attribute in a Telerik PropertiesGrid (aka RadPropertisGrid) ...

In the code behind:

In the view model:

What is an unstable build?

Software management build systems like TeamCity or Jenkins provide automated build and testing on software team commits. If it cannot build the code ... well the build has failed as there are no binaries to test or even install. A complete no starter. But what if the binaries are built but a test failed? Is that a fail, or is that something less? Some build systems report a build with failing tests as "unstable". A useful clarification or a damaging depreciation of the build process?

That the code can be compiled to binaries (or whatever) is great. It means that the team has complied with the coding language but does not give any indication of what the code does. Useful, necessary, but not sufficient.

If the tests fail, is it useful to indicate it as 'unstable' rather than failed? Useful clarification of status?

So what does a test failure mean?
If the application does not meet specification/requirement - that is a fail, not unstable.

If a code element has been altered outside of intent then then that is a fail, the application, or the code's maintainability, is compromised. That is not unstable, a developer has lowered code health and may well have broken the application.

Treat your tests like your application. A failure is a failure. "Unstable" just means ... "you may may be able to ignore".
Posted by Rob Smyth at 20:46 No comments:

I like the look of this Altwork station. They describe it as "the world’s first workstation designed for high-intensity computer users".

I like the way it converts from seat to recline. If the base could be made a little less 'industrial' it would be perfect.

Grow up Java developers - there is space, it exists, and is empty

It seems every day I loose time inserting underscores for spaces and it seems every time to be a Java application .... what is the problem handling spaces?

This one is courtesy of Thoughtwork's GOCD. Come o.n guys ... give me a break ... spaces exist. Get over it.

Kinda related ... why do Java applications usually look and feel like Java applications? Is that an indication of a language/framework or culture attribute?
Posted by Rob Smyth at 20:18 No comments:

Our 5th Airedale 'Violet'' died late last year. She was an awesome dog. From the start Violet had dignity and her own self-worth. An independent dog who, like most Airedales, obeyed when it suited her. But was always loving, if she got a pat!

When Rowan died, and she had a puppy 'Golley' to contend with, she finally to share her toys!

A wonderful dog with self-dignity. At 14 years her arthritis finally got to her (she never liked the cold). 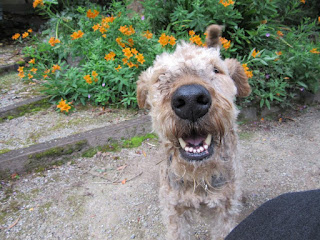 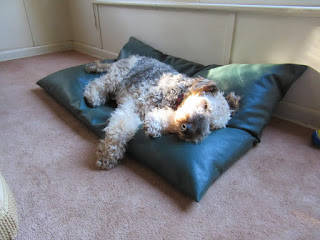 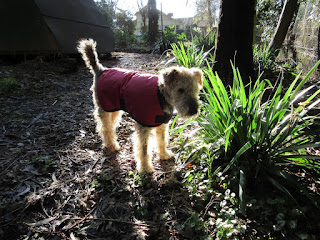 A life well lived with dignity.
Posted by Rob Smyth at 19:22 No comments:

For the team status/task board you can create custom magnet buttons for team members on Zazzle. You an upload images whatever. I just created a few buttons for me ...

Zazzle's navigation is difficult. Look for keywords like 'round', 'magnet', 'custom'.

In my case we have the classic corner desks. Nice for individuals but no so great for teamwork. So add a couple of TVs/monitors (so cheap now), a central team table, a wireless keyboard and mouse and you have a team pit swarm hub/portal.


To swarm a team member can slide to the central desk and remote desktop to their environment appears on the large team TVs/monitors. Now the whole team can discuss / collaborate / swarm. Quick, easy, ad-hock.

When done, close the remote desktop and the monitors return to their team status / virtual wall duties.

A way to turn up the volume on team collaboration? An ad-hock solution? A coaching crucible? An incremental step toward pair programming or mob programming .... dunno.
Posted by Rob Smyth at 20:21 No comments:

A team's sprint board needs to radiate information about how the sprint is going. Fridge magnets for use on a team's magnetic sprint whiteboard can be custom printed. The trick is to print "business card fridge magnets" for only ~AU$10 for 10-20 cards. Vistaprint (I have no commercial benefit) provides a great service of uploading your card image (e.g PNG) and printing it.

I've found these magnetic card reusable using whiteboard markers. For magnetic tags like "BLOCKED" or team member names, create a card with many tiles and cutout the tiles when delivered (See example below). 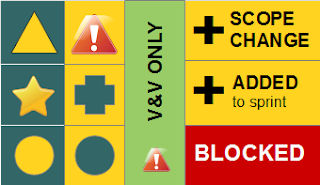 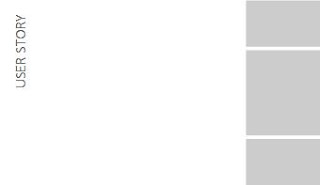 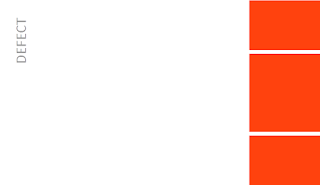 You have a legacy code base that has properties returning concrete types. This makes unit testing (UT) very difficult. To change the signature to use an interface requires lot or refactoring and therefore risk of an error refactoring. Here is an approach to incrementally refactor these properties out of the code base.

To provide an alternative add another property to the type with a suffix like "I" that returns the appropriate interface. This become the base property with the concrete property referencing this new property. This enables new or code being changed to migrate to the new property incrementally. Once the old property is no longer used it will be deleted.

The use of the ObsoletAttribute ensures that developers will see the property struck out in intellisense to promote useage of PropertyBI instead.

When the old, concrete type, property is no longer used it will be deleted and the "I" suffix property renamed to replace it.