The last few months I've been on a new project using Visual Studio 2010. Being a green field project we started out going for the very latest suite of Microsoft integrated tools using TFS for project management and revision control. What we found was that TFS was ... hmmm ... how do put this? ... still born. Try as we did we just could not give it life and after months of painful efforts we ditched it for subversion and TeamCity so we could get on with the project.

I just could not find anything about TFS that was, in a professional sense usable.

My summary of TFS:

Details below. If your going to read further either you find it hard to believe Microsoft could do such a thing (yea, me too), your a Microsoft basher looking for a fix (go away!), or you need know the experience to avoid it.

My experience with TFS for revision controls was .... well ... it doesn't work. It is that basic. Well actually it is worse, it silently drops changes. Yep, a revision control system (RCS) that actually looses code. Hard to believe, and we were so sure that nobody could release such a bad RCS that we thought that it had to be the way we were using it. But no, check in your changes, then update and guess what? Your changes are gone!

That TFS cannot reliable keep code changes is sufficient to just forget it and move on. But I suppose that may be fixed. Trouble is that this dude is just way out of its league. TFS's idea of a merge conflict is that the file changed
Posted by Rob Smyth at 17:57 1 comment: 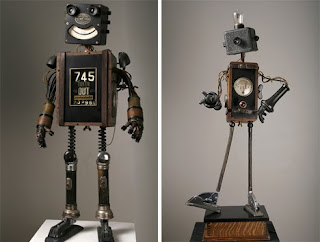 My favorite robot remains Robbie from forbidden planet but this Lipson guy is awesome with his assembliage robot (another guy's work pictured above).

Now these are sculptures I wuv:

The "Rapid 2" Assemblage Robot Sculpture is my favorite. My birthday is coming!